QWI Investments Limited (QWI), for the six months ended March 31, 2022, reported total income of $226.15 million relative to total income of $265.33 million booked in the corresponding period last year. Of this:

Unrealized currency gain amounted to 24.01 million compared to a loss of $11.49 million).

Notably, Management stated that, “The Company’s portfolio is reviewed on an ongoing basis with changes as the Investment Committee believes will be advantageous to QWI. The sharp increases in inflation and interest rates now taking place could impact the prices of investments and securities negatively over the next two years. Indications are that our holdings will continue to perform well over the balance of the fiscal year and we remain cautiously optimistic. It is worth noting that in Jamaica we are still seeing a number of companies reporting good results and raising additional share capital. So far, investors are responding well to these developments and the current trend appears to be positive. While the Junior Market has led the improvement in the local market and more price gains are expected from that market, there are emerging signs that the JSE Main market could rebound sometime during this year.” 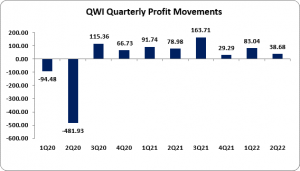