The company states that “The companies loan portfolio grew by 37% over the review period, moving from $304.7 million at June 30, 2016 to $417.2 million at the end of June 30, 2017. This demonstrates a strong and positive response from both new and existing customers to ISP’s loan promotions and product offerings”. 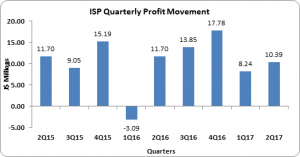