Kingston Properties Limited reported Rental Income of $101.08 million, 59% more than the $63.73 million reported for 2016. Property management fee of $5.97 million was reported for 2017 relative to none reported in 2016. There was no Other Income reported in 2017 and according to the company “In the 2016 review period, one of our tenants opted to terminate their lease prematurely and was subjected to an early termination fee of approximately $12.2 million pursuant to the terms of the lease”.

Operating expenses which consist of ‘direct property expenses’ and administrative expenses’ grew by 28% to $62.10 million relative to the $48.55 million posted for the same period last year.

As such, Results of Operating activities before other gains amounted to $44.95 million, a 64% increase when compared to the $27.37 million posted last year.

Operating profit closed the period at $45.10 million, this compares with the $145.28 million booked a year ago. This was due to $116.89 million reported as Fair value Gain on Investment in the 2016 period.

Total liabilities were $880.17 million as at June 30, 2017 compared to $448.67 million as at June 30, 2016. This was mainly due to a 115% increase in non–current liabilities totalling $817.53 million, which was $436.97 million more than reported in 2016.  According to the company “The loans are part of the Group’s strategy to increase leverage within prudent limits secured by properties to bolster the expansion of the property portfolio”. 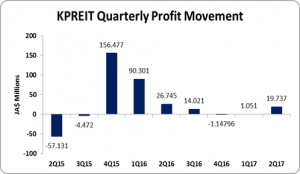