The Department of Work Permits received 6,089 applications for work permits for the 2019/20 fiscal year. When compared to the previous fiscal year, this is a decline of 710 (or 10.4%). There were 2,624 new applicants among the total number of applications received, accounting for 43% of the total.

With 1,985 work permits granted, the occupational category “Professionals” was the most popular. With 1,614 and 1,330, respectively, the categories “Technicians and Associate Professionals” and “Managers” came in second and third.

In terms of approvals per industry, the figures show that “Wholesale and Retail Trade, Repair of Motor Vehicles and Motorcycles” received the most (2,170 or 36.5%) of work permit approvals. Renewals accounted for 1,476 of these. This was followed by the “Construction” industry (1,304 or 22%). “Activities of Extraterritorial Organizations and Bodies” had the fewest (2) work permit approvals, which were also renewals. 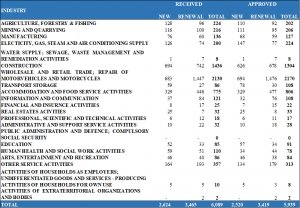