Jamaica Teas (JAMT), for the 3 months ended December 2017, reported revenue for the first quarter ended December 2017 of $456.15 million, an increase of 22% compared to the $373.90 million booked for the corresponding period in 2016.  According to the company, “Revenues from our manufacturing operations grew 40% in the period while supermarket sales increased by 9%. Export sales of manufactured products were up a very strong 66% while domestic manufacturing sales increased by 15%.” Revenue from the manufacturing segment amounted to $296.53 million compared to $212.51 million in 2016.

Revenue for the ‘Property Sale & Rental” segment contracted to $47.76 million compared to $58.65 million in 2016. According to the company, “few sales contracts of homes were completed at the housing project during the quarter as some of the homes were still in the final phases of physical completion and sales formalities were being finalized. All the homes in the project but one is under contract and collection and revenue recognition is expected to proceed apace in our second quarter.”

According to JAMT, “the increase in profits this quarter was less than the increase in sales due ,in part ,to the realization of lower gains from our investment portfolio than in 2016 and a reversal from an unrealized exchange gain on our net foreign currency assets last year to an unrealized loss this year due to the revaluation of the local dollar. We also incurred certain non-recurring costs from the closure and sale of KIW’s warehouse operations during this quarter. 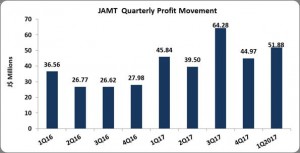