Jamaican Teas Limited (JAMT) reported a 14% increase in revenues to total $1.77 billion (2017: $1.55 billion). For the quarter, revenues amounted to $422.17 million (2017: $357.64 million). JAMT highlighted that, “the Company’s focus on driving revenues in our core business resulted in fourth quarter revenues from our manufacturing operations growing 20 percent for both exports and domestic sales. Supermarket sales increased by 9 percent.”

JAMT further indicated that, “For the year, export sales increased by a strong 24 percent, domestic manufacturing revenues grew 12 percent and supermarket revenues rose 6 percent. The growth in exports in 2017/8 exceeded the average rate of export growth of almost 17 per cent in US$ experienced in the eight preceding years.”

Cost of sales increased by 16% to $1.42 billion (2017: $1.22 billion). As a result, gross profit grew 6% to $349.04 million (2017: $330.16 million). For the quarter, gross profit closed at $87.71 million relative to $87.39 million reported in the previous corresponding quarter. The company mentioned that, “The improved sales results experienced in the quarter are not reflected in the Group’s gross profits which were flat, primarily as a result of a $15 million profit deterioration at H Mahfood and Sons Ltd arising from increased construction and remediation costs incurred to finish the Orchid Estates housing development.”

Pre-tax profits fell by 5% for the year end, decreasing from $219.16 million in 2017 to $208.04 million. JAMT incurred tax expenses of $18.35 million compared to $23.03 million during the 2017 comparable period. For the quarter, pretax profit amounted to $62.83 million (2017: $53.78 million). The Company indicated that, “this increase was primarily because of lower borrowing costs and the elimination of losses at Bay City Foods Ltd, our associated company.”

However, for the year net profit attributable to shareholders declined slightly by 1% to close the period at $193.27 million (2017: $194.59 million). While for the quarter, net profit attributable to shareholders went up by 36% totaling $59.55 million compared to $43.63 million in the prior comparable quarter. JAMT stated that, “Net profit for the year is $8 million lower than the prior year primarily due to the non-recurrence of the $29 million gain on the acquisition of KIW reported last year but not repeated this year.” 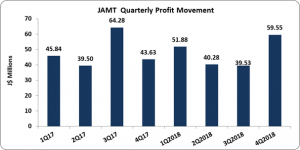