Hotel revenue from discontinued operations slipped 37% to close at $2.71 billion versus $4.29 billion in the same period in 2017.

The Company mentioned that, “Effective 1 July 2018, the Group liquidated 91% of its Sigma Real Estate Portfolio (Sigma Portfolio) units in exchange for shares in Jamziv Limited, thereby increasing its holding of Playa shares indirectly.”

The Company indicated that, “The loss was mainly due to a $1.91 billion unrealized fair value loss, less $665 million in foreign currency gains, from our investment in Jamziv Limited.”

Additionally, it was mentioned that, “On 17 September 2018, Playa announced a strategic alliance with the Hilton group, where Playa will leverage their industry leading all-inclusive expertise with Hilton’s global portfolio of brands, and over 82 million participating members in Hilton Honors, Hilton’s award-winning loyalty program. Playa’s commitment to expansion through brand affiliations and strategic alliances, as well as through property acquisitions and developments is expected to produce strong growth over the medium to long term as our outlook remains positive for tourism in the region.” 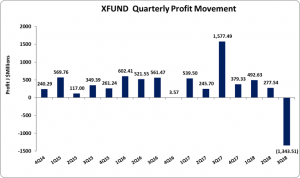