Caribbean Producers Jamaica Limited (CPJ), for the first three months ended September 30, 2018 reported that revenues marginally increased by 0.04 %, to close the period at $24.31 million compared to the $24.30 million for the same period last year. According to the company “the reduction was primarily a result of the impairment in intangible asset of US$0.7 M resulting from the attempted implementation from the Warehouse Management System in the fourth quarter of prior year and logistics and supply chain disruption resulting in increased costs.”

Cost of goods sold inched up by 1%, closing the period at $17.98 million relative to $17.76 million for the same period last year. CPJ noted, “The stability in revenues was both noted on and off shore. The increase in the cost of operating revenue was mainly due to the extraordinary increase in container surcharges resulting from the backlog of containers on the port as a result of the delay experienced during the attempted implementation of the IT platform in the latter part of the final quarter prior year.”

Selling and distribution expenses were $5.91 million an 18% increase on the $5.02 million posted last year.

Other operating expense totaled $4,266 compared with the operating income of $13,407 booked the previous year.

CPJ further noted, “Management believes that the disruptive impact of the IT implementation project has been contained and the recovery effort to normalize the business has been achieved. The core business remains strong and robust. However, the extraordinary impact of the write down to the Profit & Loss will be a challenge to offset and deliver a strong year of financial results in the current year ending June 2019.”

The other major project that was announced for this fiscal year “is the construction of the new 56,000 square ft. distribution facility. This will be completed in Q2 ahead of schedule and within budget. The expectation of this capital project will enable greater efficiency in service delivery and consolidate all satellite warehouses in western Jamaica.”

The third major project is “the expansion of the CPJ St, Lucia distribution facility which will also be completed in Q2 and operational in Q3.” 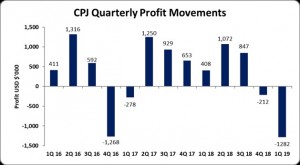