Kingston Properties Limited (KPREIT) for the nine months ended September 30, 2018, reported rental income of $152.35 million, 3% more than the $147.67 million reported for 2017. However, for the quarter, there was a 4% decline from $46.58 million in 2017 to $44.78 million in 2018. Property management fees for the nine months period amounted to $3.51 million (2017: $6.96 million). KPREIT mentioned that, “the decline in rental revenue is attributed to the reduction in the number of condo units held during the quarter when compared with the same period a year prior, along with the usual spike in vacancy in the units held at the W Fort Lauderdale during the summer months.”

Operating expenses increased by 10% to $101.29 million (2017: $91.92 million).The Company recorded a Fair value loss on investment properties of $10.68 (2017: nil). For the quarter, operating expenses closed at $32.07 million versus $29.82 million in the prior corresponding quarter.  The Company stated that, “operating expenses for the first nine months of the year reflect higher year on year direct property and administrative expenses, such as HOA dues and audit and professional fees.”

Tax credit of $30.44 million was booked compared to a tax charge of $8.63 million last year. This resulted in net profit for the period of $10.36 million compared to $23.83 million for the same period last year. For the quarter, the Company reported a net loss of $24.56 million relative to a net profit of $3.04 million. 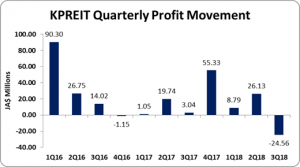