Jamaican Teas Limited (JAMT), for the nine months ended June 30, 2019, reported a decline in revenues to total $1.01 billion (2018: $1.34 billion). For the quarter, revenues amounted to $316.67 million compared to $438.61 million in the previous corresponding quarter. JAMT stated that, “the quarter shows a sharp fall in revenues but this does not reflect a negative development for the Group as it arose from a decision to dispose of 100% of the supermarket previously owned by JRG Shoppers Delite to an associated company, Bay City Foods Ltd (BCF). We also acquired a debenture in BCF previously owned by a third party in exchange for shares in JTL.”

Finance cost for the period under review amounted to $15.83 million (2018: $14.26 million), while for the quarter finance costs closed at $7.13 million versus $4.83 million in the prior corresponding quarter.

In addition, “apart from our regular business, construction of an apartment complex in the Manor Park area continued to progress with completion presently scheduled for November 2019.We are currently receiving offers from interested purchasers,” JAMT noted. 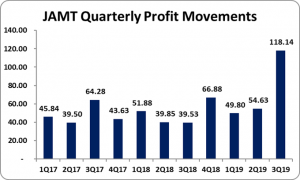