Jamaican Teas Limited (JAMT) reported a 27% decrease in revenues to total $1.29 billion (2018: $1.77 billion). For the quarter, revenues amounted to $282.07 million (2018: $422.17 million). JAMT highlighted that, “JTL’s fourth quarter revenues from manufacturing operations increased almost 4 percent for the quarter from $272.8 million to $282.5 million due to increased export sales partly offset by lower domestic sales. Supermarket sales show a decline for the quarter from $121 million to $ nil, as a result of the transfer of our supermarket to our associated company, Bay City Foods Ltd (BCF) on Feb 1, 2019. BCF has contributed over $12.6 million to the Group’s interest income over the last 8 months (versus nil in the prior year to date) plus a further $2 million share in the company’s net income.”

JAMT further indicated that, “Our main tea business held its own even as we suffered a temporary setback in sales in the USA market due to our main distributer there right sizing its inventories.”

Taxation for the year amounted to $106.61 million in contrast to $9.59 million in 2018. Net profit for the year increased to $483.12 million relative to $193.26 million recorded twelve months earlier. Profit for the fourth quarter closed at $215.36 million (2018: $55.05 million). JAMT stated that, “The outstanding performance achieved is due to a number of initiatives taken in prior periods bearing fruit in the fiscal year ended in September. For this quarter we reported realised investment gains of $8 million (versus almost $4m in the group’s year ago quarter) and fair value gains of $250 million (versus unrealized gains of $44 m in the group’s year ago quarter).”

Management mentioned, “In October 2019 JTL purchased the 50% of BCF it did not already own. As a result, BCF became a wholly owned subsidiary of the Group and the Group’s future earnings reports will once again include the sales and profits of the Shoppers Delite supermarket. In 2019 we accounted for BCF as an associated company and only showed our share of its profit and net assets in our financial statements. Sales at the supermarket in October were ahead of October 2018.”

JAMT stated, “Between June and Sept 2019 QWI borrowed over $400 million to fund its investments and this was included in Accounts Payable at year end. These purchases together with over $300 million in fair value gains recognized in the same period contributed to the significant growth in the Groups quoted investments holdings to $1.3 billion. $1.192 Billion, being the proceeds of QWI’s IPO, are included in Other Receivables at the year end. These monies were received in October 2019, after the year end.” 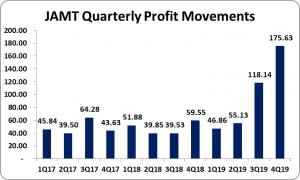