The Jamaica Operations contributed $7.87 billion, a 9% increase compared to $7.23 billion for the same period of 2016. JBG noted, “Jamaica Operations reported a first quarter segment result of $499 million, which was $192 million of 30% below last year’s normalised segment result of $641 million. This decrease was attributed to lowed production volumes and higher distribution costs when compared to the prior year. These higher costs were as a result of a rebalancing of the inventory in the poultry segment, as well as some third-party storage issues that took place in the first quarter. Total revenue for our Jamaica Operations showed a strong increase of 8%.”

US Operations recorded an increase of 27% to total $3.09 billion relative to $2.43 billion last year. According to the company, “our U.S. Operations continued to grow steadily and reported a segment result of $318 million, which was a 7% increase over the prior year’s result of $297 million. Our presence in this market remains robust with a broad and diverse customer base. Total revenue for this segment increased driven by increased sales of our main products – fertile eggs and baby chicks.”

Other Caribbean Operations contributed $526.77 million, an increase of 47% when compared to $3359.50 million. Management highlighted, “in the Other Caribbean segment, Haiti Broilers SA continues to benefit from the increased production and sale of table eggs which increased to 30% of the market, compared to 22% of the market at the end of the first quarter last year. The segment result for the first quarter amounted to $121 million, which was 64% above the previous year.”

Other income climbed 25% from $55.04 million for the first quarter of 2016 to $68.94 million in 2017. Distribution costs rose 38% to close at $443.78 million relative to $321.26 million recorded for the prior year’s comparable period, while administration and other expenses grew by 4% to $1.86 billion (2016: $1.79 billion). According to the company, “distribution costs and administrative costs, reflect an increase of 9% over the previous  year due primarily to inflation, exchange rate movements and increased development costs associated with the improvement of the Group’s information systems and IT security. These expenses include one-off cost elements incurred in the quarter which are not expected to recur.”

Net profit attributable to shareholders amounted to $197.69 million relative to $400.02 million booking for the comparable period in 2016.

Total comprehensive income for the first quarter amounted to $211.35 million relative to a loss of $459.85 million. 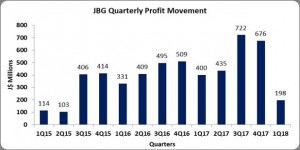