Jamaica Broilers Group (JBG) for the three months ended July 31,2019 reported total revenues of $13.26 billion, a 9% increase on the $12.16 billion reported in 2018. Total revenue was broken down as follows. Of total revenues: 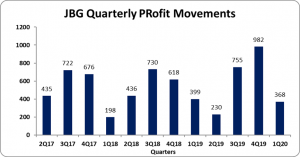