Consequently, profit before taxation amounted to $91.94 million relative to $153.84 million in 2017 representing a 40% decrease year-on-year for the period.

As a result, net profit for the period amounted to $91.94 million relative to $153.79 million. For the fourth quarter net losses of $2.29 million were recorded versus profits of $25.09 million in last year.

JETCON noted, “The company took decisive steps to move to a higher level going forward by investing in new facilities to accommodate expansion of sales. The impact is that we expanded staffing and increased spending on leasing property at Kingston Wharves at their new Tinson Pen facility that will allow us to expand sales beyond our past capacity going forward. Jetcon is one of only two car dealers granted the privilege of use of the facility, and the only pre-owned dealer with this access. Adjustments in importation strategy were implemented when the Pre-Inspection practices were introduced by Government, we also changed in the method of transporting vehicles into the island resulted in higher pre-delivery costs and a reduction in profit margin.”

According to management, “Orders for vehicles climbed sharply in December and continued into the New Year. January sales were 30 percent down compared to 2018, however this has closed to 12 percent at the end of February with sales in February being up moderately above the same month in 2018. The year saw us increasing focus on servicing of vehicles. Service income increased by 128 percent over 2017 for the year, more importantly, for 2019 to date growth is 285 percent over the similar period in 2018. Jetcon will begin its push into wholesaling of units to other dealers, and early indications show promising results. Sales for February 2019, is 10 percent up on 2018 and 9 percent up on January 2019.” 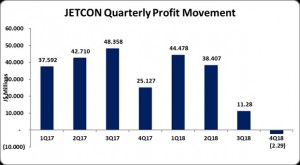