JETCON for the nine months ended September 30, 2020 reported total turnover of $467.16 million, 38% less than the $747.99 million reported for the corresponding period in 2019. Turnover for the third quarter fell 45% to $153.43 million compared to $280.82 million in 2019. Management noted, “Jetcon Corporation is among companies that experienced negative effect, with the company’s second quarter being the worse one for us. Following a loss in the June quarter, with sales falling sharply, business picked in the September quarter, but sales continue to be lower than in 2019. This trend is expected to continue into the fourth quarter.”

Management noted, “Despite the challenges so far due to the COVID-19 pandemic, Jetcon has managed to endure with a relatively strong financial position. With smart marketing and pricing strategies, business continues to recover. We will continue to actively adjust these strategies as time goes on

The company, as at September 30, 2020 recorded total assets of  $627.07 million, a decrease of 6% when compared to $664.20 million recorded last year. This decline was primarily attributable to the 15% in ‘Inventories’ to total $394.93 million (2019: $466.07 million). According to the Company, “Management undertook cost saving measures starting with the second quarter that resulted in reduced cost and kept a tight rein on the level of inventories, the companies biggest asset in monetary terms. We halted the purchase of inventories from March, which resulted in reduced inventories of vehicles since. We have begun purchasing vehicles again, to replenish certain models, as business slowly recovers. Nevertheless, inventories compared to the same third quarter of 2019 have decreased from $466 million to $395 million and the strategy for the next few months is for some more reduction in inventories.” 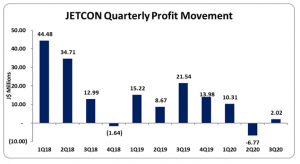