Derrimon Trading Limited (DTL), for the nine months ended September 30, 2020, reported consolidated trading income of $9.62 billion, an increase of 1% when compared to the $9.53 billion booked in 2019. For the quarter, the Company reported a 2% increase in trading income totalling $3.32 billion relative to $3.24 billion in the previous corresponding quarter. DTL indicated that, “The improvements realised for this nine-month period was primarily attributed to a combination of factors which includes improvement in the procurement and logistics process as well as a focus on higher yielding products.”

Total operating expenses was $1.44 billion for the period under review, representing a growth of 14% on the $1.27 million recorded in the prior year. For the quarter, total operating expenses closed at $505.60 million (2019: $441.54 million). According to DTL, “This was influenced by increased rental expenses in relation to the new Distribution Centre, salaries and wages, utilities which were impacted by the depreciation of the Jamaican dollar and other operational costs driven by the new sanitation regime given the requirements of the Covid-19 pandemic.

Finance cost decreased by 8% amounting to $146.03 million for the period versus $159.38 million in 2019. For the quarter, finance cost closed at $54.91 million (2019: $63.69 million). It was noted that, “The realignment of our debt portfolio from short term to long term amortized facilities, the switching from US Dollar loans to Jamaican Dollar facilities and the re-negotiation of interest rates continued to positively impact the finance cost of the Group.” 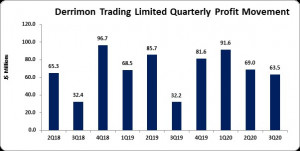