The Food and Drink Division reported a 4% increase in revenue to total $2.75 billion relative to $2.64 billion reported in 2018. The Group stated that, “during the quarter, the JP F&D Division benefitted from a solid result in the European juice business, improved yields on banana farms in Jamaica and growth in regional consumer and travel retail markets in which JP St Mary’s and Tortuga brands trade.”

Logistics and Infrastructure increased by 11% year over year to total $2.04 billion (2018: $1.83 billion). The Group highlighted that, “the Logistics & Infrastructure Division continues to benefit from a series of initiatives to develop Kingston Wharves as a leading regional multipurpose and multiuser terminal, and Newport West as a warehousing and logistics hub. During the first quarter, Kingston Wharves benefited from handling growing volumes of domestic and regional trade in a range of cargo types including bulk, breakbulk and automotive shipments.”

JP’s selling, administration and other operating expenses rose 8% to close at $876.63 million, this compares to $815.26 million booked a year earlier. JP also recorded a share of profit in joint venture and associated company of $453,000 relative to loss of $421,000 reported in the previous corresponding period. Other losses for the quarter amounted to $27.83 million in contrast to an income of $53.05 million reported for the same quarter of 2018.

JP mentioned that, “Subsequent to the end of the first quarter, JP announced the sale of 30 percent of its snack food operations (including the JP St. Mary’s brand) to Wisynco Group Limited (‘WGL’) for approximately $740 million. The deal has been completed with effect from April 29th and as part of the deal, WGL was appointed the exclusive distributor for JP St. Mary’s snacks in Jamaica. JP looks forward to partnering with Wisynco to continue to grow the JP St. Mary’s brand in Jamaica and internationally and we are very optimistic about the prospects for this business. We expect sales growth to arise from more streamlined distribution and, importantly, from ongoing new product development in tropical snacks.”

Additionally, the Group noted that, “during the quarter JP completed the installation of a new large scale, high pressure processing line for the juice plant, and new bagging lines and power systems for the snack factory. The Tortuga bakery also completed the product development work and launch programme for two new cake lines for Spanish language markets, and for a banana bread for the Jamaican market, made with JP St. Mary’s bananas from our farm.” 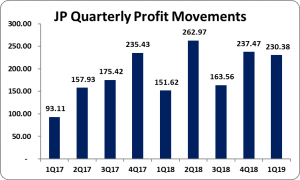