tTech Limited (tTech), fr the three months ended March 31, 2019, booked a 5% decrease in revenues to $66.47 million compared to $69.82 million recorded for the prior financial year’s first quarter. According to management, “With all things considered, we are buoyed by the fact that our recurring revenues continue to trend in the right direction and our organization is working aggressively on the promise of delivering insanely good IT Services to our valued clients. Our sales team is diligently working through the strong pipeline of opportunities and their efforts are expected to positively impact our growth and performance in 2019.”

Consequently, no taxes were recorded for the period, thus net profit for the quarter amounted to $758,000 versus $6.73 million booked for the same quarter of 2018. Management noted, “The appreciation of the Jamaican dollar relative to the United States dollar adversely affected the company’s profits in the quarter. Work-in-progress and the impact of new accounting standards also affected revenue recognition for some of our services.”

TTECH stated, “tTech has had a challenging start to 2019. Our team was excited with the addition of new outsourcing clients in Kingston and Montego Bay, however, we are still awaiting decisions on several major projects which could have contributed positively to revenues and profit in the quarter.” 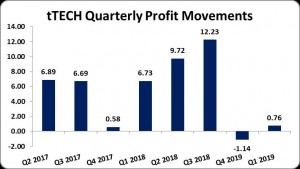