Jamaica Stock Exchange Group (JSE) for the first three months ended March 31, 2020 recorded total revenue of $508.59 million, a 14% increase when compared to the $445.12 million booked the prior comparable quarter. Of this:

Profit before tax totaled $198.95 million compared to $185.16 million reported in the same quarter of last year.

Tax charges for the quarter totaled $73.80 million (2019: $61.55 million). As such, JSE reported a net profit for the quarter of $125.14 million compared to a profit of $123.60 million in the prior comparable quarter, a 1% marginal increase. Notably, JSE highlighted that, “for the First Quarter, market activities have declined. However, there has been no significant change in profit over the corresponding period.” 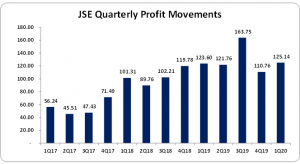