Kingston Wharves Limited (KW) for the three ended March 31, 2020 reported total revenue of $1.88 billion, a 2% increase relative to the $1.83 billion recorded for the corresponding period in 2019.

The Company noted, “The Terminal Operations division generated operating revenue of $1.5 billion for the three-month period, an increase of 4% over the corresponding period of the prior year. Divisional profits increased by 26% from $474 million to $594 million year-on-year. The positive start to 2020 is a direct result of strategic investments in key areas of the terminal facilities and operations, which continue to positively impact operational efficiency and profitability. The Logistics Services division continued to experience growth in the first quarter. This business unit generated revenues of $529 million, an increase of 6% over the prior year. Divisional profits marginally increased by 2% relative to 2019 from $138 million to $140 million.”

Other operating income for the period totaled $140.35 million relative to other operating expenses of $24.11 million booked in the prior corresponding quarter.

Administrative Expenses for the period climbed by 14%, amounting to $337.33 million from the $295.33 million recorded for the same quarter last year.

Finance Costs for the period declined 16% total $40.16 million relative $47.59 million recorded for the same quarter in 2019. The Company booked no share of results of joint venture relative to  $120,000 recorded in the prior comparable quarter.

Taxation charges amounted to $133.20 million for the period, a 26% increase relative to the charges of $106 million incurred for same period last year.

Notwithstanding, Net Profit for the period rose by approximately 23% to total $561.94 million relative to $458.55 million recorded for the corresponding period in 2019.

Net Profit attributable to shareholders rose by approximately 22% to total $553.73 million relative to $452.61 million recorded for the corresponding period in 2019.

Additionally, KW noted, “KWL remains optimistic about the long term structural soundness and competitiveness of our core business, notwithstanding the immediate negative impact of the Coronavirus pandemic on the global economy. With the onset of the COVID-19 crisis, Kingston Wharves activated its Business Continuity Plan to facilitate the ongoing effective functioning of the port terminal and logistics centers as critical channels for the movement of essential cargo including food and medical supplies.”

“Even as we focus on the most immediate implications of COVID-19 for our business, we are mindful that the changing nature of the supply chain post COVID-19 will mean that regional ports may have the potential to operate as more than a marine terminal for the loading and discharge of cargo. The prospects now available to ports will include facilitating shipping lines, logistics providers as well as retailers and distributors in port-centered warehousing and direct delivery of products to their end users. KWL’s investment in logistics facilities and confirmed SEZ status, coupled with its third-party logistics offering positions the Group well to support our clients and their changing needs,” Management highlighted. 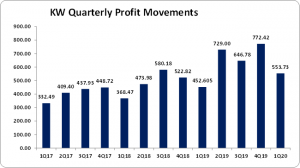