Jamaica Stock Exchange Limited (JSE), for the first six months ended June 30, 2019 recorded total revenue of $874.52 million, a 31% increase when compared to the $665.92 million booked the prior year’s corresponding period. For the second quarter the company reported a 36% increase in total revenue to close the quarter at $429.41 million (2018: $316.34 million). The company noted, “this can be attributed mainly to excellent performances in Cess Fee which increased by $47.4 million (47%) and Fee Income which increased by $53.20 (27%) when compared to 2018 Second Quarter. Worthy of note is the improvement in eCampus Income which increased by $9.20 million (256%) when compared to the corresponding quarter for 2018. This is due mainly to an increase in the number of seminars and workshops.” JSE ‘s revenue breakdown for the six months period are as followed:

Consequently, profit before tax totaled $364.65 million compared to $284.52 million the year prior. For the second quarter the company reported a 34% increase in profit before taxation totaling $179.49 million compared to $133.52 million recorded for the prior year’s  similar quarter. Tax charges for the six months rose to $119.28 million relative to $93.45 million the prior year.

Earnings per share for the six months totaled $0.35 compared to $0.27 in 2018. EPS for the quarter amounted to $0.17 (2018: $0.13). The trailing twelve months earnings per share amounted to $0.67. The numbers of shares used in the calculations are 701,250,000 units. JSE stock price last traded on July 22, 2019 at $37.44. JSE, “The second quarter performance has been excellent and the outlook for the remainder of the year is positive especially as it is expected there will be more listing of companies listing their securities on the Exchange and other new product offerings. It is also anticipated that there will be a positive movement in Fee Income due to expected increase in the Group’s clientele and increased in the number of investors.” 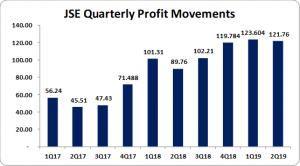