Jamaica Stock Exchange Group (JSE) for the first three months ended March 31, 2022 recorded total revenue of $561.71 million, a 37% increase when compared to the $410.44 million booked the prior comparable quarter. Of this:

Profit before tax totaled $205.70 million compared to $114.33 million reported in the same quarter of last year.

Tax charges for the quarter totaled $69.73 million (2021: $40.20 million). As such, JSE reported a net profit for the quarter of $135.98 million compared to a profit of $74.13 million in the prior comparable quarter, reflecting a 83% increase. Notably, JSE highlighted that, “the increase in Net Profit reflects the improvement in Total Income during the quarter, primarily driven by the higher trading values in the market.”

JSE highlighted, “The JSEG will continue in the medium to long term to pursue a strategic path of growth through the exploration and promotion of new and existing markets, new product development and the continuous improvement in systems and service delivery to the JSEG’s customers and other stakeholders.” 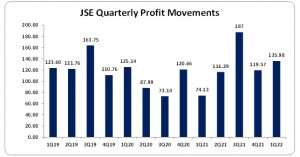