PanJam Investments Limited (PJAM) for the three months ended March 31, 2022, reported a total income of $774.98 million, 1% down from $784.85 million booked for the prior year’s corresponding period. Of total income:

PJAM noted, “income from PanJam’s core operations for the quarter remained relatively flat year over year. Our securities trading portfolio generated marginally improved investment income of $236.9 million, which was driven by higher dividends and unrealized trading gains. Although property income declined by 4.2 per cent, our real estate portfolio continued to show its resilience with stable occupancy of 92%.”

Impairment recovery for the three months amounted to $2.45 million, 73% down from $8.93 million booked for the comparable period last year.

Consequently, operating profit closed the three months ended March 31, 2022 at $226.30 million relative to an operating income of $371.41 million recorded in the prior corresponding period.

Finance costs for the period rose by 8%, amounting to $241.36 million compared to the $224.34 million for the comparable period in 2021 due to “as a result of higher effective interest rates and increased borrowing levels,” according to PJAM.

Share of results of associated companies rose to close the quarter at $1.15 billion (2021: $902.65 million). Management highlighted that, “The results of associated companies consist principally of our 30.2% investment in Sagicor. We also hold minority positions in a number of diverse private entities across the adventure tourism, business process outsourcing, hospitality, consumer products, micro-lending and office rental sectors. Also, the 28% was driven by Sagicor results which grew by 31%.”

Net profit attributable to shareholders for the period amounted to $1.06 billion, $51.76 million greater than the $1.01 billion recorded in the prior comparable period.

Management noted, “while we believe that uncertainty will continue for some time, PanJam’s long-term investment horizon remains both relevant and appropriate to this environment, as evidenced by our flagship ROK Hotel and Residences project which is very close to completion.” 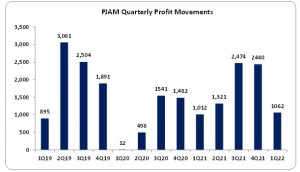