As such, JSE reported a net profit of $293.28 million compared to a profit of $149.18 million in the prior year, a 97% increase. While net profit for the quarter amounted to $102.21 million (2016: $47.43 million). JSE noted that this was due to the, “increase in the volume of business in relation to the trading of securities has resulted in Cess Income being a major contributor.”

JSE added, “The Third Quarter performance was favorable and the outlook for the remainder of the year is positive, as it is expected there will be more companies listing their securities on the Exchange and the secondary market activities will remain buoyant. The Group will continue in the medium to long term to pursue a strategic path of growth through the promotion of new and existing markets, new products development and the continuous improvement of service delivery to the Group’s customer and other stakeholders.” 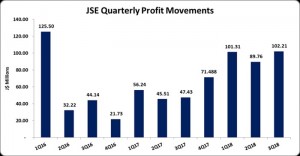