Knutsford Express Services Limited for the nine months ended February 29, 2020 reported total revenue of $925.23 million, a 10% increase when compared with the $841.93 million reported for the same period in 2019. For the third quarter, revenues amounted to $318.04 million, an 11% increase relative to the $286.82 million booked for the corresponding period in 2019. According to KEX, the increase in revenues was due to, “continued demand for our transport services.”

Management noted that in light of the outbreak of COVID-19, “during March 2020, the Company suspended passenger services on several routes and implemented cost-cutting strategies while maintaining our courier services throughout the island. Notwithstanding, we expect the pandemic to have a negative impact on our fourth quarter results. The Board and management are monitoring the situation closely and will take all necessary steps to resume full passenger services within the government’s stipulated guidelines.” 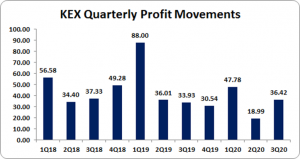