KEX added, “On the basis of strong demand for our existing travel and courier services we have started to implement growth aimed at diversifying the company’s income stream. In this regard, at the end of the quarter, we moved to acquire a small coach charter operation in Florida, USA.” 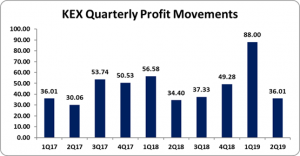