Other income for the first nine months of 2017 was US$98 compared to nil for the comparable period in 2018. 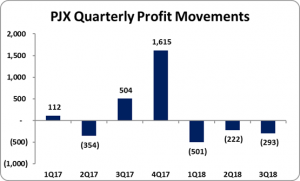