There was an underwriting loss of $142.53 million as at September 30, 2018 relative to a loss of $71.72 million. Claims expenses increased grossly by 278% to $783.27 million compared $207.35 million reported for the same period last year. For the quarter, claims expenses closed at $259.66 million (2017: $7.10 million). The Company highlighted that, “The year-to-date expense included an actuarial estimate of $98,910,000 for claims incurred but not yet reported. This estimate was calculated by our independent actuary based on two methods that reflect our historical claims incurred and paid development patterns. As a result of this trend, management has been tasked to reassess the underwriting practices (risk assessment and pricing) with a view to improving the company’s profitability.” 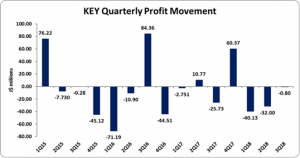