Key Insurance Company Limited (KEY) for the nine months ended September 30, 2019 reported a 79% decline in net premiums written to $199.62 million relative to $943.53 million recorded for the same period in 2018. This performance was as a result of a 22% decrease in gross premium written which closed the period at $1.14 billion (2018: $1.46 billion). Notably, insurance ceded for the period rose 80% to $935.80 million relative to $520.97 million for the period ended September 30, 2018. For the quarter, gross premium written went down 36% closing at $332.94 million (2018: $518.06 million). KEY indicated that, “our underwriting strategy to achieve our targeted risk profile business, resulted in reduced gross premium income of 36% over last year’s third quarter results. Additionally, the gross premiums written are a realisation of the correction of the aggressive motor business growth at KEY in line with the industry 24% year over year (YOY) growth over the last five years where we positioned ourselves to allow more customers to experience the KEY brand.”

There was an underwriting loss of $341.28 million as at September 30, 2019 relative to a loss of $142.53 million. Claims expenses increased by 30% to $1.02 billion compared $783.27 million reported for the same period last year. For the quarter, claims expenses closed at $280.34 million (2018: $259.66 million). The Company highlighted that, “this improved performance has been further buttressed by, as previously reported the purchase of additional motor reinsurance.”

The Company noted, “additionally, the company’s MCT as at the end of the nine-month period is 253% above the FSC minimum regulatory requirement of 250% and a 123% improvement to that reported at December 2018. The company’s liquidity and investment position remain robust in conjunction with our continued efficiency in handling the claims of our valued policyholders.” Furthermore, “improved underwriting and reinsurance strategies in conjunction with cost containment and income earned from our investment portfolio which stands at $1.2 billion as at September 30, 2019 continue to be our focus to reverse the company’s loss-making position.” 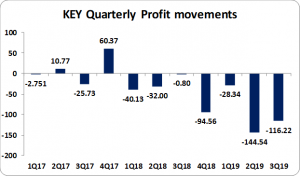