KEY noted, “As a pre-emptive action in response to the increasing motor claims, at the start of the year the company purchased additional motor reinsurance that is aligned to its turnaround strategy of maintaining and increasing its targeted profile book of business. This fruitful six-month action has resulted in reinsurance recoveries increasing by $506 million. Additionally, the company’s MCT as at the end of the six-month period is 277% surpassing the FSC minimum regulatory requirement of 250%. The company’s liquidity position remains robust in conjunction with our continued efficiency in handling the claims of our valued policyholders. ”

KEY added, “There was an overall increase of $7 million in operating costs for the period, due to non-recurring professional fees in the second quarter of 2019 in comparison to that obtained in the similar quarter of 2018.” 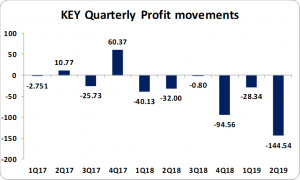