GWEST Corporation Limited, for the three months ended June 30, 2019, booked Total Revenue amounting to $33.14 million, an increase of 30% when compared with the $25.41 million booked last year. Management noted, “this increase was positively influenced by a 52% increase in patient fees. Rental and lease income increased by 8% quarter over quarter”.

Finance cost for the period amounted to $12.01 million relative to $8.36 million booked in for the comparable period in 2018. Management noted, “There was a $3.65 million increase in our finance cost and this was mainly attributed to our adoption of new International Financial Reporting Standards (IFRS 16).”

The Company noted, “The outlook for the future remains encouraging as we continue with our restructuring and rationalizing exercise while improving our revenue stream through increased marketing and forming alliances with our target customer base. Efforts to sell a portion of our investment properties and to negotiate financial arrangements to finance expansion plans with respect to our Surgery Centre and Inpatient Units are advancing as planned. Our open house held to showcase vacant spaces for lease and sale has yielded positive results which would translate to improved revenue in the near future. We will continue to analyse our offerings seek out opportunities for acquisitions where potential prospects may arise in the marketplace.”

As at June 30, 2019, total assets amounted to $1.73 billion, 6% more than $1.63 billion the year prior. This was as a result of the increase in ‘Property and equipment’ which closed $511.52 million (2018: $392.71 million) however tempered by decreases in ‘Short term deposits’ which totalled $44.78 million ($129.90 million). The company stated that, “the primary contributing factor for the increase in total value of our balance sheet was due to the increase in our fixed and non-current assets mainly due to adoption of IFRS 16 which requires the recognition of long term leases as assets on our balance sheet.” 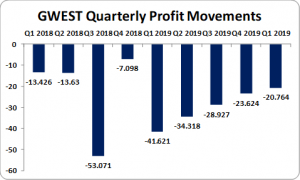