For the period ended June 30, 2019, Caribbean Flavours & Fragrances Limited’s (CFF) revenue increased by 8% to $226.33 million relative to $209.43 million for the comparable period in 2018. For the quarter, the Company generated revenue of $113.75 million (2018: $120.71 million), a 6% decrease year over year.  CFF noted that, “this was driven by seasonal purchases based on manufacturers demand but we expect to see improvements in sales in the upcoming two quarters of this financial year.”

Cost of sales also increased for the period to $141.83 million, this compares to the prior year’s figure of $125.37 million, representing an increase of 13%. Gross profit increased slightly to $84.50 million for the period in review and compares to the prior year’s amount of $84.06 million. For the quarter, gross profit closed at $47.21 million (2018: $49.37 million). Management stated, “fluctuations in the foreign exchange rate as well as increased logistics costs negatively impacted our gross profit for the reporting quarter.”

Following taxation of $5.02 million (2018: mil), net profit for the period amounted to $35.22 million representing a 21% decrease from the comparable period’s figure of $44.74 million, while for the quarter, net profit also decreased by 21% from $29.32 million to $23.29 million in 2019. “The marginal reduction in profit is expected given the additional costs incurred which are aligned to the future growth prospects of the Company, CFF stated.

CFF mentioned that, “sales continue to be heading in the right direction despite lower than anticipated sales of some new products during the quarter and we anticipate that our sugar reduction solution will continue to be accepted in the market and this will positively improve both future sales and profitability. In addition, we will continue with the refinement of our strategies and the improvement to our various cost structures in order to drive the desired efficiency whilst improving our cost of sales and gross profit.”

Additionally, the Company highlighted, “we seek to explore and gain more acceptance in new markets such as Cuba as well as deepening our presence in many of the local and overseas markets.” 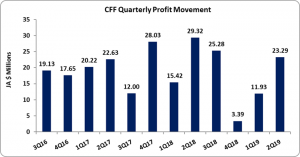