Lasco Financial Services (LASF), recorded for the three months ended June 30, 2019, a total of $585.80 million in Trading Income; this represents a growth of 11% relative to the $526.05 million recorded in the comparable quarter in 2018.  Other Income for the quarter amounted to $68.67 million, a rise of 141% compared to $28.47 million in 2018. LASF stated, “This increase is driven by growth in transactions mainly from the loans business over the corresponding period.”

Operating Expenses for the period amounted to $476.16 million which is 25% more than the $382.26 million recorded in June 2018. Selling and Promotional Expenses increased 26% to close at $229.65 million relative to $181.79 million in 2018, while Administrative Expenses rose 23% to close at $246.51 million (2018: $200.46 million). Management noted, “this was as a result of transformational expenses, taxation, finance cost for working capital and growth in staff which we are expecting to reap the associated synergies in the future.”

LASF mentioned, “LFSL the parent continues to focus on its core activities; Cambio and Remittance services in Jamaica while improving our delivery channels and LASCO Microfinance Limited will concentrate on providing credit in pursuit of financial inclusion and to create an impact on economic development.” 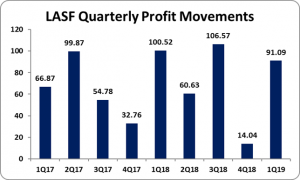