Finance and depreciation costs increased to $28.75 million when compared to $15.58 million for the same period of 2020. 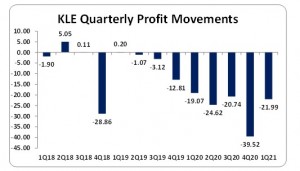