K.L.E Group Limited (KLE), for the year ended December 31, 2019, recorded total revenue of $224.57 million (2018: $219.93 million), representing a 2% increase. Whereas revenue, for the fourth quarter ended December 31, 2019, rose 12% to $70.68 million (2018: $63.28 million). Notably, KLE mentioned that, “Revenue is directly related to sales from our flagship restaurant, Tracks and Records Marketplace and Management fees earned throughout the year.” Furthermore, “Sales from the restaurant performed better than expected as the major construction on Constant Spring Road continued into the 2019 year as well as the Marketplace location underwent a major renovation to the complex which made it difficult for customers to access the property. Management embarked on innovative marketing strategies to combat these issues resulting in the increase sales from the restaurant.”

Other operating income fell by 55% to $6.09 million relative to $13.57 million booked in the prior corresponding period. In addition, Administrative and Other Expenses decreased by 6% from $181.27 million in 2018 to $170.51 million for year ended December 31, 2019. This increase in expenses were partly attributable to: “increased marketing efforts in 2019 to combat the negative effects of the road work and the renovations of Marketplace and the change in the packaging of Materials used in compliance to the single use plastic and styrofoam ban,” as per Management.

Consequently, loss from operation amounted to $4.10 million in contrast to the loss of $13.44 million for the same period last year, representing a 70% improvement. Operating Loss for the quarter improved to $14.07 million (2019: loss of $29.29 million).

KLE highlighted that, “The company absorbed a $4.7 million loss from its associate company T&R Restaurant Systems Limited T/A Franchise Jamaica which was a significant contributor to it net loss position. The company has performed significantly better in 2019 than the previous year. Franchise Jamaica reported total revenues of $30 million for the 2019 year in comparison to 19 million in 2018.”

KLE Group noted, “the company has successfully operated the Kingston location of Tracks and Records for the past 9 years. The infrastructure that exists to operate this business unit has been underutilized in the past. The domestic growth will aid in achieving these economies of scale. The franchising model will serve us better in major markets where we can capitalize on the infrastructure and market knowledge of major players already operating in these markets. This has proven very effective with our London franchisee. In order to achieve this and other key elements to our growth program, we are moving towards a significant capital raise which will enable the business to execute the plan. The last time the company had any injection of capital was in 2011.”

Moreover, “The international franchising will grow through partnerships with investors similar to the UK Franchisee. This investor profile requires a different level of support than the smaller single unit franchisee. On top of this we are zeroing in on two additional markets to move in while the UK market penetration continues. The focus will be on Toronto and South Florida. The focused approach has already resulted in some solid leads with investors we feel fit the bill.” 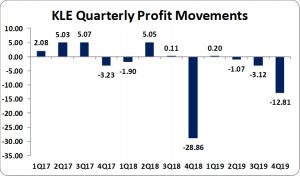