Finance cost was $22.75 million for the six months ended March 31, 2018 compared with $19.84 million for the same period of 2017, a 15% growth. Finance income for the period totalled $31.24 million versus $397,000 for the corresponding period for 2017. Consequently, the company recorded an improvement in net finance cost to $8.49 million (2017: $19.44 million). The company highlighted that, “This decline was primarily due to the depreciation of the Jamaican dollar resulting in net unrealized gains on translation of foreign currency investments and borrowings.”

Management highlighted, “Our diversification strategy continues to reap benefits with rental revenue setting a new high so far this year. Our Jamaican and Caymanian property portfolios continue to do well, with full occupancy and attractive cash yields recorded in those markets. We are currently actively pursuing more acquisitions in these markets and hope to conclude a transaction by the 4th quarter of 2018.” 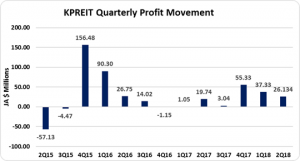