C2W incurred US$18,393 for administrative expenses, a 33% increase compared to US$13,799 last year for the comparable period.

Sponsorship income for the six months amounted to US$12,333 relative to nil twelve months earlier. The company booked US$1,500 for “Management and Consulting fee” in 2017 compared to nil in 2018.

Shareholder’s deficit closed at a US$245,148 relative to a shareholder’s equity of US$54,435 in prior year’s corresponding period This resulted in a negative book value per share of US$0.0006 compared to US$0.0001 a year earlier. 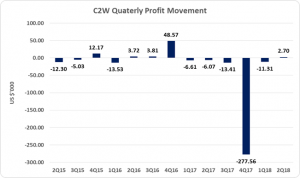