Carreras Limited, for the three months ended June 30, 2018, reported Operating Revenue of $3.15 billion, 12% increase relative to $2.82 billion booked in 2017. The company highlighted that, “This increase over the prior period is due mainly to an increase in sales volumes albeit over a lower volume base as well as effective management of costs.”

CAR also noted that, “Based on the improved performance for the quarter, we remain cautious though optimistic regarding the outlook for the rest of the financial year. The company continues to reap the reward of continuous investment in our brands, particularly our core brands, Craven “A” and Matterhorn. The strength of our brands, people and relationships continue to position us for the future.”

The company mentioned that, “The increase in sales for the period is on a lower volume bases as a result of the excise increase implemented last year. Overall, we continue to be negatively impacted by excise increases implemented in prior periods, which in turn has unintendedly resulted in the increased illicit trade in cigarettes.”

Administrative, distribution and marketing expenses decreased 7% to total $490.05 million (2017: $529.41 million). Management noted that, “Continued cost-cutting, and containment initiatives are being reflected in the 7% reduction in overheads over the prior period. It is noteworthy, that this reduction was achieved despite a 2.8% increase in inflation.” 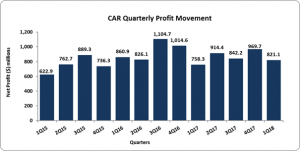