Margaritaville (Turks) Ltd (MTL) for the year ended May 31, 2018, reported Total Revenue of  US$6.02 million, an 8% decline relative to the US$6.53 recorded for the prior financial year. Total revenue for the quarter amounted to US$1.96 million, a growth of 3% compared with the US$1.89 million reported for the comparable quarter in 2017. 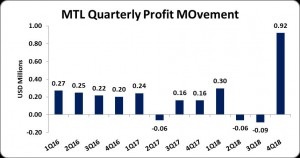