For the three months ended May 31, 2021, Caribbean Cream Limited (KREMI)’s turnover rose by 28% to $548.45 million (2020: $429.98 million). According to the Company, “We are deeply grateful for continued strong product demand while we work on our strategy to get closer to the consumer.”

Administrative expenses rose by 37% to close at $125.61 million (2020: $91.96 million). In addition, selling and distribution costs rose by 21% from $12.59 million in 2020 to $15.22 million for the period under review. According to management, “The increase was because of higher transportation cost resulting from more deliveries, an internal reclassification of electricity, salary increases, staff-related expenditures due to COVID-19 safety measures and the full annualized cost for the new Ocho Rios depot.” Nevertheless, operating profit for the quarter amounted to $66.70 million, up 97% relative to the $33.87 million booked in the prior year.

Consequently, profit before taxation amounted to $61.90 million relative to $30.92 million in 2020 representing a 100% increase year-on-year for the period.

Taxes of $7.74 million were charged for the period relative to $3.87 million booked in the corresponding quarter in the prior year. As such, net profit attributable to shareholders increased by 100% from $27.06 million in 2020 to $54.16 million for the period under review. 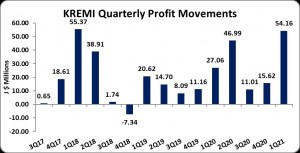