For the three months ended May 31, 2019, Caribbean Cream Limited (KREMI)’s turnover rose by 1% to $417.67 million (2018: $411.75 million). According to the Company, “sales were impacted due to a 2 weeks factory closure during this quarter to undertake modifications and repairs to enable us to gain HACCP Certification.”

Administrative Expenses climbed 21% to close at $91.72 million (2018: $75.90 million). According to management, “ this is primarily due to increased costs in utilities, rental and repairs and maintenance of the depots.” In addition, Selling and Distribution Costs rose by 13% from $13.22 million to $14.88 million. Consequently, operating profit for the quarter amounted to $29.02 million, down 50% relative to $58.04 million book in the prior year.

Consequently, profit before taxation amounted to $23.57 million relative to $55.37 million in 2018 representing a 57% decrease year-on-year for the period.

Management also noted, “In March of 2019, we “rolled out” our fully Novelty Line on “Five Fantastic Frosty Flavour of Icicles” Island wide which consisted of the following flavours: Watermelon, Grape, Kola Champagne, Sour Cherry & Green Apple. The launch was supported by the full range of media & promotional activities which included, TV, Radio, Press, Outdoor and social media campaigns together with “on the ground” sampling & promotional campaigns, a; featuring our lovable new Mascot “Mee”. “The new May Pen Depot opened its doors the 12th of April 2019, to serve May Pen and the surrounding communities. Both existing and new customers have given us very positive feedback noting the following in particular: Pricing, Product Availability, Ease of Access & Spacious Grounds.” 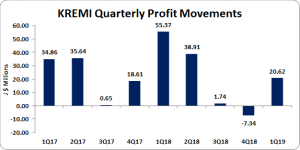