Costs of Sales amounted to $571.45 (2018: $515.52 million), an increase of 11%.  Management noted, “the company continues to experience price increases in its’ local purchases along with increased costs in utilities, specifically water due to the recent prolonged drought forcing the company to buy more trucked water than normal. The Company will continue to explore strategic initiatives to drive down costs.”

Administrative Expenses climbed 16% to close at $184.32 million (2018: $158.75 million), while Selling and Distribution Costs rose by 33% from $27.48 million to $36.50 million. Management indicated “our administrative expenses included a one-off cost in relation to the valuation of the company’s building. In addition, the company had additional costs associated with the opening of the new Depot in May Pen. The Company now controls four(4) depots for the distribution of its products where the expectation is to increase our sales reach and competitiveness.” Consequently, operating profit for the six months period amounted to $49.30 million, down 50% relative to $98.91 million book in 2018.

Furthermore, the company noted, “ in April of this year, CCl commissioned its new novelty line to produce stick products and launched its new line of icicles. Initial sales have been encouraging. To support this product, we have kicked the advertising campaign into high gear, with visibility on TV, Radio, Billboards and Social Media. This combined with IN-store sampling continue to keep this new product in the forefront of consumers’ mind.”

The company’s assets totalled $1.05 billion (2018: $981.11 million), $68.16 million more than its value as at August 2018. The increase in assets was largely due to an increase of $134.83 million in ‘Property, Plant and Equipment to a total of $749.16 million (2018: $614.33 million). Inventory also increased by 41% to close the year at $176.78 million compared to the $125.23 reported in the previous year. Cash and Cash Equivalents however tempered the increase over the past twelve months by a 69%  decline to $58.05 million (2018: $188.57 million). Management noted, “the company continues to remain strong as total assets less current liabilities amounting to $874 million maintains its’ upward trend where it forges ahead with its investment in property, plant & equipment with the objective to improve operating efficiencies and diversify product offering.” 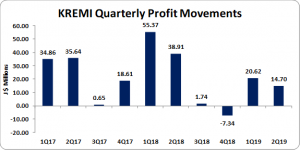