Knutsford Express Services Limited (KEX), for the three months ended August 31, 2019 reported total revenue of $324.52 million, an 11% or $31.59 million increase when compared with the $292.93 million reported for the same period in 2018. KEX noted, “this was due to continued demand for our transport services.”

KEX noted, “our results have been impacted primarily by expenses associated with refurbishment of our fleet, the build-out of several new routes and increased departures. In addition, we continue to invest in our overseas subsidiary KE Connect USA. We of course look forward to these investments coming of age and redounding to our benefit.”

KEX added, “we are encouraged by the response and usage by Our customers of our online reservation and booking systems. More inquiries and transactions are being done through our website’s chat box and mobile app inciting us to invest further in improving our automated customer service platform for increased efficiencies.” 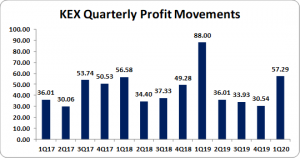