Kingston Wharves Limited (KW) for the six months ended June 30, 2022, reported revenue of $4.56 billion a 16% increase when compared to $3.91 billion recorded for the corresponding period of the prior year. Revenue for the second quarter grew 12% to $2.31 billion (2021: $2.06 billion); as both the Company’s ‘Terminal Operations’ and ‘Logistics Service’ Divisions reported increases.

Management noted, “preliminary works are currently underway on expanding our deep-water berths, clearing yard space and improving its functionality, and developing new warehousing and logistics facilities that will allow us to capitalize on opportunities. Improvements to our berth, container yard, and cargo handling equipment and facilities, will be complemented by additional investments in digital infrastructure, such as the upgrading of our terminal operating system, expansion of e-commerce mechanisms and technologically-enabled security enhancements.” 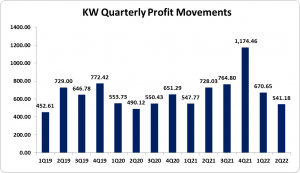