The ‘Terminal Operations’ which accounted for 69% of total revenues, fell 14% year over year to a total of $4.96 billion relative to $5.75 billion last year. According to KW, “The Kingston Wharves terminal continues to handle a wide range of cargo types serving the domestic and transshipment markets. The volume of cargo handled during the year was reduced as a result of the COVID-19 pandemic.”

The company’s ‘Logistics & Ancillary Services’ grew 2%, to total $2.18 billion, up from $2.14 billion booked twelve months earlier. The company highlighted that, “The Logistics Services Division has emerged as a resilient profit centre within KWL, while offering agile logistics solutions and providing useful alternatives to both commercial and personal effects clients. The division’s modern warehousing, digital and systems capabilities also allowed KWL to maintain solid service levels notwithstanding the stringent health and safety requirem ents associated with the pandemic.”

No gain on acquisition of subsidiary and gain on disposal of interest in joint venture were booked for the period under review relative to the prior year where they ended at $16.12 million and $22.16 million, respectively. Finance cost closed the period at $154.88 million (2019: $177.92 million).

Total comprehensive income for the year end closed at $6.80 billion (2019: $2.64 billion). In addition, net profit attributable to shareholders declined by 14% to total $2.24 billion relative to $2.60 billion recorded for the corresponding period in 2019. Net profits attributable to shareholders for the quarter amounted to $643.43 million, a 17% decline relative to the $772.42 million recorded for the same quarter of 2019.

Notably, KW stated, “We will be enhancing our investment in robust security technology, policies and system s in 2021. In this period of relative economic uncertainty, we will prioritize our investment in security as a way of reducing the range of risk factors facing our clients.” 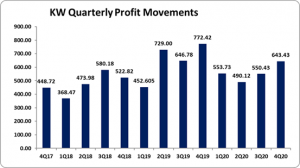