Kingston Wharves Limited (KW) for the three ended March 31, 2022 reported total revenue of $2.25 billion, a 21% increase relative to the $1.85 billion recorded for the corresponding period in 2021.

Other operating income for the period totaled $80.08 million relative to the $119.96 million booked in the prior corresponding quarter.

Administrative Expenses for the period climbed 21%, amounting to $380.76 million from the $314.85 million recorded for the same quarter last year.

As such, Operating Profit closed the three months period at $796.42 million, a 17% increase relative to the $680.72 million recorded for the comparable period in 2021.

Taxation charges amounted to $90.51 million for the period, a 7% appreciation relative to the charges of $84.71 million incurred for same period last year.

Notwithstanding, Net Profit for the period rose by 21% to total $678.86 million relative to $560.25 million recorded for the corresponding period in 2021.

Net Profit attributable to shareholders rose by 22% to total $670.65 million relative to $547.77 million recorded for the corresponding period in 2021. 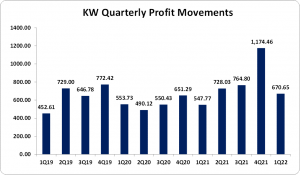