138SL’s income increase by 9% to $571.18 million relative to the $522.64 million recorded for the corresponding six months period the year prior.

138SL highlighted that, “The Covid-19 pandemic continues to impact on our occupancy and revenues during the second quarter. Despite the relaxation by the Government in the Covid –19 measures, management’s policy is to still place high priority on the health and safety of our employees and residents. This is demonstrated through our continuation of measures that were implemented to ensure the safety of our residents and staff. As we emerge from the pandemic, we are optimistic that we will see a consistent increase in our occupancy and revenues. We remain grateful to our employees, our various partners, residents, and other stakeholders who have helped us to navigate during these challenging times. We look forward to your continued support. Special thanks to our financiers and stockholders for your confidence in the business.” 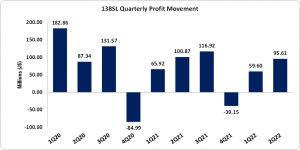