Other operating income increased to $8.34 million relative to the $1.93  that was documented the quarter in 2021.

Administrative expenses amounted to $66.79 million (2021: $55.44 million). The Company noted this was attributed, “to a significant FX (foreign exchange) loss from J$55.4M to J$66.8M arising from the revaluation of the USD denominated loan. The company refinanced the USD Loan for a JMD loan with a local financial institution which will eliminate the FX losses incurred in the past which have average at around J$45M per year”

This translated into 2% increase in operating profit to $67.57 million when compared to last year’s $66.14 million.

Finance costs of $20.37 million was recorded for the period under review (2021: $10.81 million), “the company incurred new fess in the first quarter during the refinancing which included processing and commitment fees” as per SML. As such, profit before tax decreased to $47.20 million for the quarter ended March 2022 relative to $55.33 million documented in the same period last year.

Total comprehensive income of $31.97 million was reported for the period versus $109.58 million recorded in the prior corresponding period.

The Company noted that, “The company looks to progressive development on its Unit 1 building project which it expects to significantly boost company revenue and profits, while improving shareholder value in the future.”

Furthermore SML noted, “Utility and security expensed at the start of April 2022 which was influenced by higher oil prices and increases in compensation respectively. There is currently a substantial rise in inflationary cost across the globe.” Additionally, “the company was able to secure an additional three lease term on 50,000 square feet of space which was subject to a 25% increase in rental that became effective on April 1, 2022.” 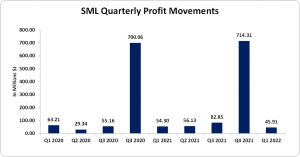