The ‘Terminal Operations’ which accounted for 73% of total revenues, increased 8% year over year to a total of $5.75 billion relative to $5.34  billion last year. According to KW, the “improved performance in this business was attributable to increased motor vehicle shipments and handling services for local and regional markets as well as, strong growth in bulk and break bulk cargo serviced at the port. KWL achieved record motor unit moves in 2019, and benefitted from the establishment of the Global Auto Logistics Centre and expanded improved yard capacity on the KWL main Terminal. The positive performance in motor vehicle, bulk cargo and break-bulk cargo volumes was partially offset by a small reduction in container movement arising from fewer vessel calls during the year from global container carriers.”

The company’s ‘Logistics & Ancillary Services’ grew 12%, to total $2.14 billion, up from $1.91 billion. The company highlighted that, “The division benefits from continued efforts to diversify and grow its customer base as well as its range logistics services. The expansion of KWL’s warehousing operations has boosted the company’s capacity to deliver full-suite logistics services, including inventory management; order picking and packing; order fulfillment; product assembling and labeling, scanning as well as warehousing and returns. The Global Auto Logistics Centre, now fully operational, also enables the company to provide the full range of logistics and inventory management services to the automotive trade.”

Other operating income for the period rose year over year to total $262.02 million (2018: $159.52 million). Administrative expenses for the year increased slightly, amounting to $1.203 billion from the $1.199 billion recorded for the same period last year.

Total comprehensive income for the year end closed at $2.63 billion (2018: $2.50 billion). In addition, net profit attributable to shareholders rose by 34% to total $2.60 billion relative to $1.95 billion recorded for the corresponding period in 2018. Net profits attributable to shareholders for the quarter amounted to $772.42 million, a 49% increase relative to the $522.82 million recorded for the same quarter of 2018.

Notably, KW stated, “in keeping with our strategic focus and core business model, in 2020, we will continue to develop and modernize our port infrastructure through the rehabilitation of berthing facilities, capital investment in cargo handling equipment and information systems that improve the efficiency and resilience of our operation. We will also continue our program of acquisition and development of modern warehousing and distribution centres that support local and regional industry engaged in imports and exports of goods.

Furthermore, “in 2019 we completed an investment of $100 Million for drainage reconstruction to alleviate flooding in Newport West. During 2020, we will seek to cooperate with other industry participants to improve the traffic flow and to improve the security arrangements in the areas surrounding the port. We take our responsibilities to port community seriously and are determined to sustain our program of continuous improvement,” the Company mentioned. 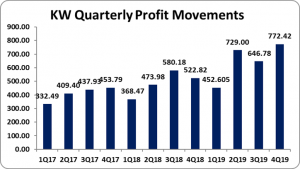