Supreme Ventures Limited (SVL), for the year ended December 31, 2019, reported a 17% increase in ‘Total Gaming Revenue’ from $32.94 billion in 2018 to $38.52 billion in 2019. While, for the quarter, ‘Total Gaming Revenue’ closed at $6.59 billion (2018: $5.05 billion). According to SVL, “Lotteries and PINs segments continued to deliver results above expectations based on the strategic initiatives implemented during the year earning $3.52 billion, an increased 17.46% over prior year. The sports betting segment (excluding AnyBet), achieved gross ticket sales of $1.31 billion and segment results of 18 million, a significant achievement in a post-World Cup year. The Horseracing segment recorded increased revenues of 14%, an improvement of $846.59 million over prior year. The segment closed the year with a loss of $214.21 million representing an improvement over prior year of 15%.”

In addition, SVL noted that, “during the year, SVL acquired Post to Post Betting Limited (trading as Anybet) which contributed $39.36 million for the first six months of operations.”

Management noted, “in January 2019, we officially launched our Guyana operations with a grand opening and spent the 2019 period focusing on infrastructure buildout through new partnerships, and the roll out of new products. The buildout of the agent network is ongoing in 2020 and will provide a platform for the accelerated growth of the business in tandem with the expected economic growth in the country.” “Supreme’s mobile offering for lotteries, sports betting and horseracing continues to be seen as an area of opportunity to enhance the customer experience and the ease of doing business. The company also worked closely with our retail network for a significant part of the year to support their completion of the compliance process for the new due diligence requirements for lottery agents introduced by the BGLC in 2019. We were successful in having a significant majority of our Retailer base deemed compliant.” 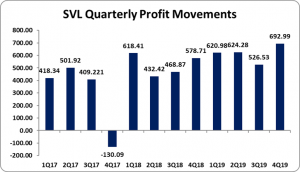